Highlights of the Quarter

MAPFRE’s premiums in the first three months of 2022 grew by 10.9 percent, reaching 6.54 billion euros with significant increases in all key markets and operations. Premium volume marks an important turning point in the company’s return to the path of growth: reaching its highest level in the last five years and reversing the downward trend observed in 2020 and 2021, when it was impacted by the COVID-19 crisis. The Group’s revenue for January to March 2022 amounted to 7.57 billion euros, up 3.6 percent compared to the first quarter of the previous fiscal year. Most countries delivered solid growth, in both euros and local currency, due to the positive performance of nearly all currencies.

MAPFRE ended the first quarter with earnings of 155 million euros (-10.9 percent), driven by the Iberia regional area, which continues as the strongest contributor to Group earnings, and the positive contribution rate of MAPFRE RE.

The geographic and business diversification strategy is reflected in the quarter’s evolution, with significant premium revenue growth in the relevant lines, boosting the strength and resilience of the Group.
In the first quarter of 2022, despite the Omicron variant, COVID-19 claims fell due to the improvement in vaccination levels. The change in these claims over the past five quarters is shown in the accompanying table. 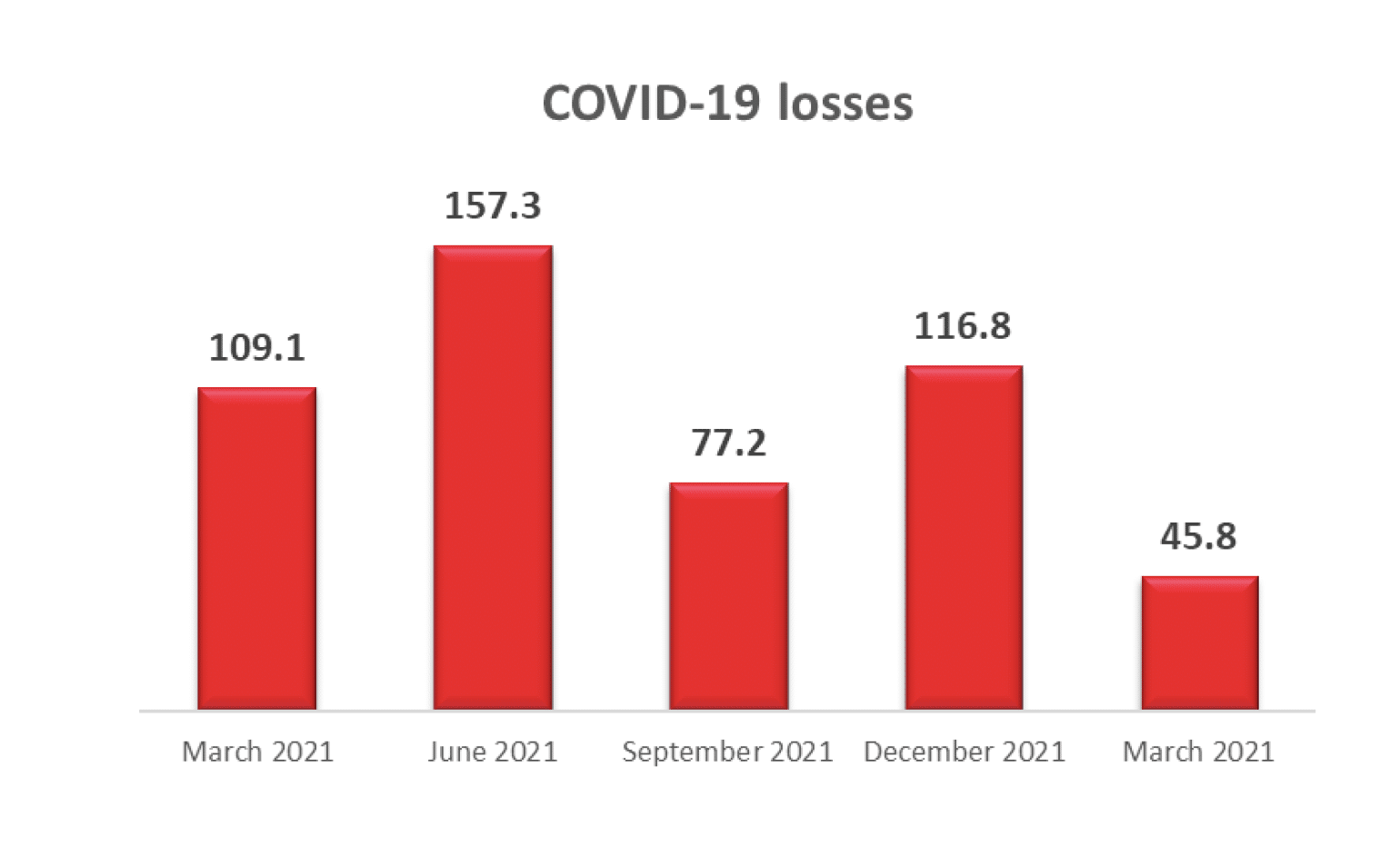 Although they are declining, these pandemic-related claims still amount to nearly 46 million euros. The majority of this amount, which has fallen 58 percent compared to the first quarter of 2021, is concentrated in LATAM, and accounts for nearly 32 million euros of the total. The breakdown of this impact by region and business unit is shown in the accompanying table. 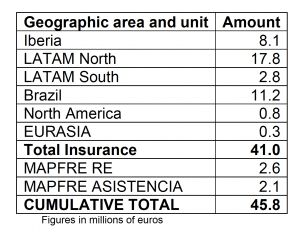 As a result of this reduction in COVID claims, Life earnings were practically double that reported in the same period of the previous year.

The combined ratio stood at 98 percent at the end of March, up 3.7 percentage points, due to broad-based growth in the loss ratio in the Automobile and Health business lines, which can be attributed to both the higher frequency of claims deriving from increased mobility and the rise in the average cost due to inflationary pressures, aggravated by the war in Ukraine.

On the positive side, MAPFRE’s geographic and business diversification protects the company against these deviations. Other lines of business, such as General P&C, have performed very favorably, with a combined ratio of 92.6 percent.

The Group’s equity at the end of the first quarter of 2022 reached 8.0 billion euros, while total assets amounted to 64.64 billion euros.

MAPFRE’s investments stood at 44.98 billion euros, of which half correspond to sovereign fixed income. 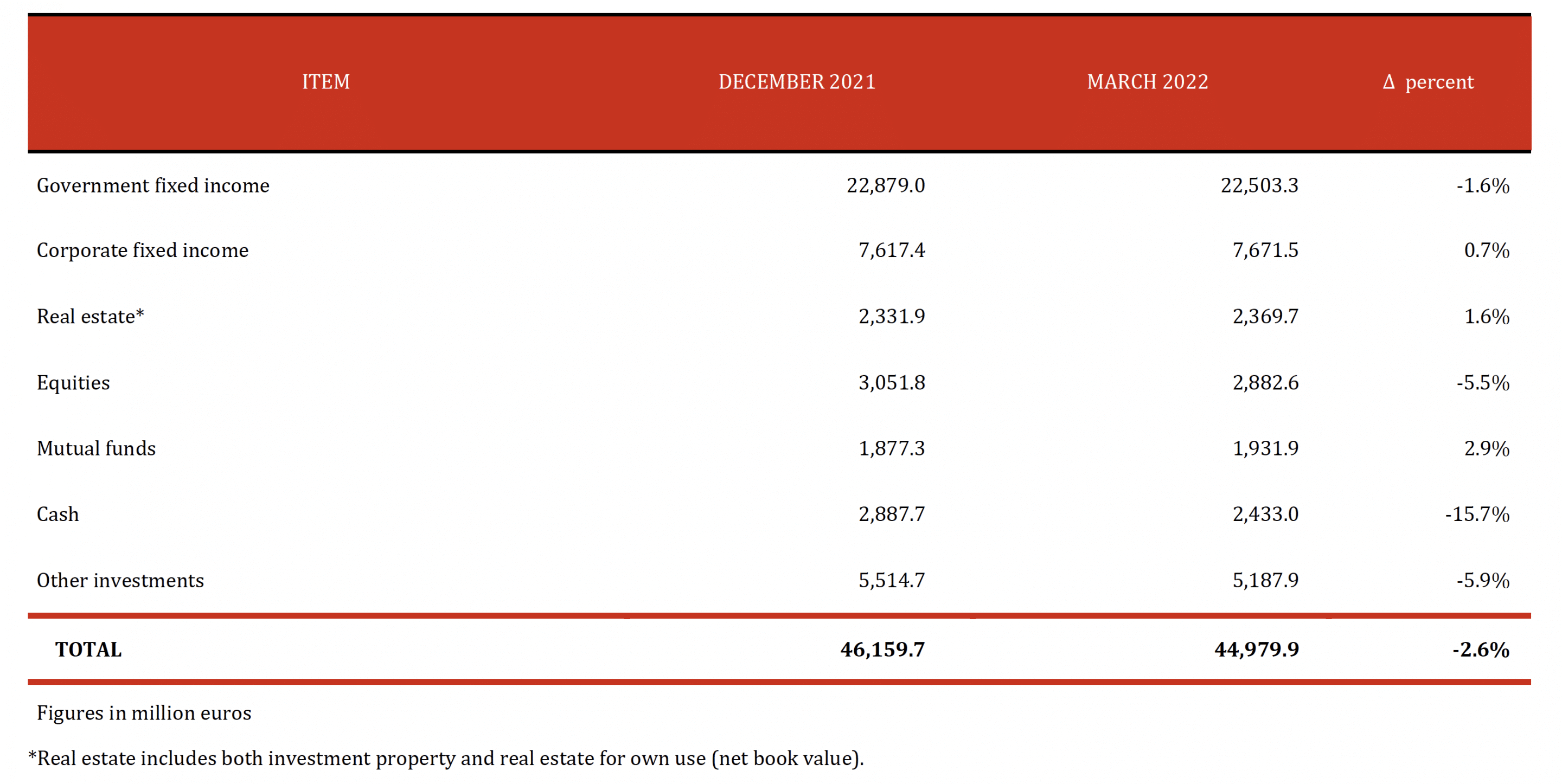 At the end of 2021, the Solvency II ratio stood at 206.3 percent, with 87.4 percent in high-quality capital (Tier 1). This ratio reflects a prudent approach to the balance sheet and active investment management, as well as the strong and resilient balance sheet of MAPFRE.

Insurance unit premiums at the close of the first quarter of 2022 totaled 5.54 billion euros, 12.1 percent more than in the same period of the previous year.

In the Iberia Regional Area (Spain and Portugal), premiums increased by 2.3 percent to 2.54 billion euros. Earnings for this regional area stood at 102 million euros, a 5.6 percent decrease compared to the same period last year, due to the exit from Bankia Vida. Excluding this effect, the regional area’s net earnings would have grown by 5.5 percent.

In Spain, premiums came in at just under 2.5 billion euros, a 1.7 percent increase. Spain continues to be the country that contributes most to both Group premiums and earnings.

Another highlight was the performance of the Automobile business, which remained stable in terms of insured vehicles, at 6.2 million units, with premiums reaching 538 million euros (-0.2 percent). Due to the return to normal mobility patterns, the loss ratio for this business line rose by more than 10 percentage points.

Likewise, premiums in the General P&C business grew by 3.4 percent, to 735 million euros, and performance was particularly strong in Homeowners (+1.7 percent) and Condominiums, up 7.7 percent in premium volume (compared to the industry’s 4.3 percent growth for the period). Also noteworthy was the 12.2 percent increase in premiums in Corporate business during the first quarter. Health and Accident premiums rose 6.4 percent to 717 million euros.

In the Life business, premiums stood at 449 million euros (-3.1 percent) at the end of the first quarter of 2022, due mainly to the exit of Bankia Vida from MAPFRE’s consolidation scope. Without this effect, premiums in this line of business would have grown by 9.4 percent, compared to the industry’s 3.4 percent growth. Particular improvement was observed in the Life Savings business, which grew by 14.8 percent due to the strong performance of unit-linked and group policies, and the agency channel, where premiums increased by 18.7 percent in the first three months of the year.

Pension funds amounted to 6.27 billion euros at the close of March

In Brazil, premiums reached 987 million euros, growing 35.3 percent due to the positive performance of the Agricultural, Life protection and Automobile insurance businesses, which rose by 76.3 percent, 21.7 percent and 35.2 percent respectively, and the upward trend of the Brazilian real, which appreciated 17.2 percent.

By lines of business, General P&C made the most significant contribution to the Group, with premiums totaling 541 million euros (+46.1 percent), followed by Life, with 295 million euros (+19.3 percent) and Automobile, growing 35.2 percent to 151 million euros.

The Brazil result is impacted by high accident levels in the Automobile line and by the persistent droughts in the south of the country, which have affected agricultural insurance in the amount of 21 million euros.

In the LATAM North Regional Area, insurance business premiums grew 26.8 percent to 576 million euros, driven in part by the appreciation of all the region’s currencies and the marked growth achieved in Health and Accident (+26.4 percent).

Net earnings for this regional area went up by 25.6 percent to 13 million euros. All countries in the region closed out the quarter with

In the North America Regional Area, premiums grew by 18.8 percent, exceeding 540 million euros in the first three months of 2022. This result was due mainly to the incorporation of the Century business, previously part of the Asistencia unit, into MAPFRE USA, and the strong performance from the General P&C line, which was up 4.2 percent. In the United States, premiums grew 22.8 percent to 487 million euros, while in Puerto Rico, premium volume stood at 54 million euros (-8.5 percent).

MAPFRE RE, which includes the reinsurance and large risks businesses, saw its premiums grow by 17.4 percent in the first three months of 2022, to 1.86 billion euros, with attributable earnings of 37 million euros. This represented a 12.5 percent increase on the same period of the previous year despite the 16-million-euro impact of the droughts in Brazil and Paraguay. Also noteworthy was the one percentage point improvement in the combined ratio, which stood at 94.1 percent at the end of March.

Meanwhile, the reinsurance business closed the quarter with premiums of 1.36 billion euros (+12 percent) and net earnings of 27 million euros (+8.6 percent).

Finally, revenues at the Asistencia Unit dropped 23.8 percent to 104 million euros. This decrease can be attributed in part to the strategy of exiting travel insurance operations in the United Kingdom, the transfer of the Century business in the United States from Asistencia to MAPFRE USA during the second half of 2021, and the sale of the business in Australia in the first quarter of this year.

This unit’s restructuring is reflected in its improved result, with a profit of 0.4 million euros in the first quarter of 2022, compared to a loss of 2.1 million euros between January and March of last year, and an improvement of 1.7 percentage points in the combined ratio, to 98.6 percent.

The Group will thus allocate a total of 446.9 million euros charged to fiscal 2021 to remunerate its shareholders, giving a payout ratio of 58.4 percent.