MAPFRE Earns 338 Million Euros in the First Six Months of the Year, and Premiums Grow 7.3 Percent to 12.5 Billion

• Geographic and business diversification becomes one of MAPFRE’s strengths in the face of adverse scenarios:
▪ Significant growth in insurance business in Brazil, LATAM North and LATAM South, mitigating the evolution of other markets.
▪ Notable improvements in profitability in General Property & Casualty (P&C) and life insurance offset the growth in claim frequency and the impact of inflation in the automobile business.
▪ Currency conversion differences, mainly due to the US dollar and the Brazilian real, add 412 million to shareholders’ equity, thereby protecting the group’s capital base.

• Total revenues grow by 5.1 percent to 14.8 billion euros in June. premium volume for these six months is the highest recorded figure for the last five years, with underlying growth of 7.7 percent. MAPFRE becomes the largest insurance group in LATAM for 2021.

• Strength of MAPFRE RE (reinsurance and large risks business), where premiums rise by 14 percent. earnings are up to 71 million euros, despite the major impact of the drought in the Paraná river basin (51 million for re and 88 million for MAPFRE as a whole).

• MAPFRE reaffirms its intention to further develop the strategic plan announced at the annual general meeting, despite the complex and uncertain environment.

MAPFRE’s premiums increased by 7.3 percent in the first half of the year to 12.51 billion euros, with the Non-Life business growing by 8.1 percent thanks to the improvement in the Automobile and General P&C insurance businesses. This is the largest half-yearly premium volume registered over the last five years, in spite of the prevailing economic context. The Group’s revenue for the first six months of the fiscal year rose to 14.81 billion euros, representing a 5.1 percent increase on the same period of last year. Net earnings were 338 million euros (-7.3%) at the end of the first half of the year as a result of the higher loss experience coming on the back of the current high inflation scenario worldwide, as well as increased mobility following the elimination of COVID-19 restrictions.

Iberia, the region that contributes the most to Group earnings, stands out for the good performance of its General P&C insurance, which is compensating for other lines, such as Automobile, which are more affected by inflation and the loss experience. MAPFRE has taken another step toward improving its profitability and has become the largest insurer in Latin America. For its part, MAPFRE RE (reinsurance and global risk businesses) saw premium volume grow by 13.9 percent, although earnings were affected by paying out 51 million euros in claims for the drought in the Paraná basin, in central-eastern South America. Lastly, the significant restructuring that the Assistance business underwent in recent quarters has enabled it to contribute 8 million euros to Group earnings, thanks to the sale of various operations.

Of note is the reduction in claims arising from COVID-19, with a cumulative impact of 73 million euros in 2022 (of which only 27 million correspond to the period from April to June). However, the return to normalcy following the removal of mobility restrictions has resulted in an increase in the loss ratio in the Automobile business line across virtually all markets.

The combined ratio at the end of June stood at 98.3 percent, an increase of 3.2 percentage points (pp), as a result of the aforementioned increase in Automobile claims, which, coupled with high inflation worldwide, affects the price of the average cost of benefits in the various lines of business. 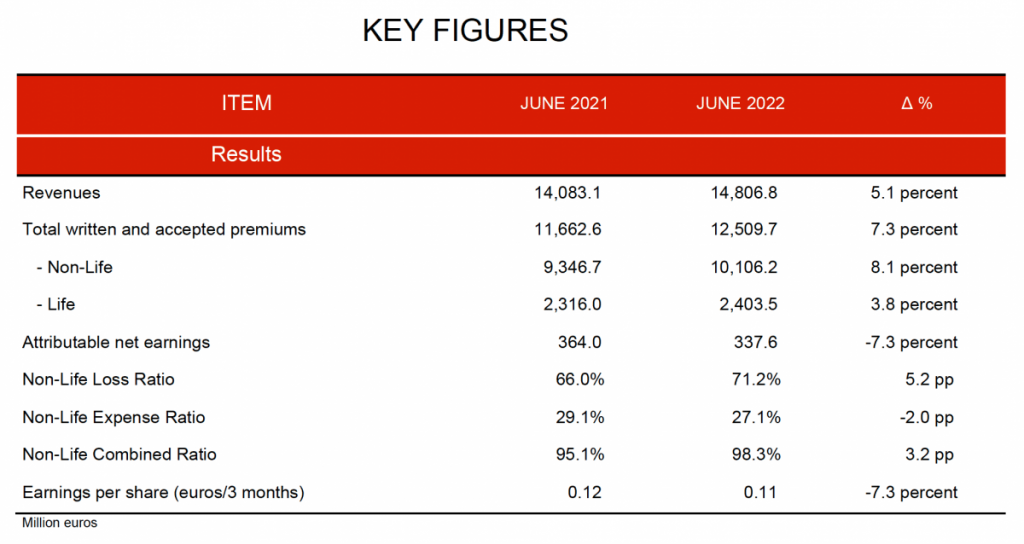 The Group’s attributable equity at the end of the first half of the year reached 7.63 billion euros, while total assets were just under 63.1 billion euros.

The Group’s shareholders’ equity was reduced mainly by the decline in the value of fixed-income securities due to rising interest rates. However, MAPFRE’s geographic diversification reduces this impact with 412 million euros from currency conversion differences.

MAPFRE’s investments amount to 42.21 billion euros, half of which correspond to sovereign fixed income.

Pension fund assets were 5.62 billion euros at the end of June, while assets in investment funds and other funds amounted to almost 5.25 billion euros.

The Solvency II ratio in March 2022 stood at 205.3 percent, with 88.1 percent high-quality capital (Tier 1). This ratio reflects MAPFRE’s strong and stable balance sheet, characterized by a prudent approach to the same and active investment management.

The Insurance Unit’s premiums between January and June 2022 grew by 8.5 percent compared to the same period one year prior, reaching 10.54 billion euros.

Iberia:
➢ In the Iberia Regional Area (Spain and Portugal), premium volume came in at just under 4.24 billion euros (-0.4%). This slight decline was due to the reduction in the Life business (-12.2%), as a result of, among other things, the exit of Bankia Vida from the Group scope.

Spain, which recorded premiums of almost 4.14 billion euros, continues to be the country that contributes most to the Group’s business and earnings, producing 176 million euros.

Automobile premiums amounted to 1.11 billion euros (-0.2%) with more than 6.1 million vehicles insured. The increase in mobility, together with the high inflation affecting the average cost of claims, has resulted in a 7-percentage-point increase in the combined ratio for this business line.

General P&C insurance premium volume grew by 3.9 percent to 1.32 billion euros, with Enterprise (+10.2%), Condominium (+7.7%), Homeowners (+2.1%), and Health and Accident (+5.6%) all delivering solid performances. The good evolution of the General P&C combined ratio, which came in at 94.6 percent, offset the evolution of this indicator in other business lines.

The earnings in this regional area grew by 21.6 percent to 44 million euros. The improvement in Life and in the financial result offset the high claims ratio in the Automobile line and the effects of the drought in the center and south of the country (with a net impact of 28 million euros).

LATAM North:
➢ In the LATAM North Regional Area, premiums amounted to 1.18 billion euros (-16.3%). This decrease is accounted for by the issuing of a two-year policy in Mexico for 469 million euros in June 2021. Excluding the effect of this policy, growth in this regional area would be 28.4 percent, driven in part by the improvement in all currency exchange rates in the region and the General P&C and Health and Accident insurance businesses.

By country, the contribution from Mexico is worth highlighting, with 608 million euros (-34.8%, due to the effect of the aforementioned two-year policy); Central America, which was up 21.4 percent to 310 million; and the Dominican Republic, with 209 million euros in premiums and growth of 31.5 percent.

Net earnings for this regional area amounted to 22 million euros, an increase of 10.8 percent over the same period one year ago. These figures were supported by, among other things, the improvement in exchange rates across the region and the evolution of the Life Protection and Health lines, whose loss experience was impacted favorably by the lower incidence of COVID-19.

All countries in the region saw significant growth over the first half of the year. Peru continues to be the largest contributor in the region, with 323 million euros in premiums (+33.2%); followed by Colombia with 206 million (+11.7%) and Chile with 182 million euros (+30.1%).

The earnings in this regional area improved by 65.4 percent to 47 million euros.

North America:
➢ In the North America Regional Area, premiums rose by 23.8 percent to 1.27 billion euros, thanks in part to the incorporation of Century from MAPFRE Asistencia USA in 2021, as well as the favorable performance of the dollar and the Automobile (+12.7%) and General P&C insurance (+11.2%) businesses.

This regional area delivered earnings of 33 million euros (-35.5%) to the end of June, as a result of the worsening of the Automobile line due to the increase in usage after the return to normalcy and high inflation rates, which result in a significant increase in the average cost of claims.

EURASIA:
➢ In the EURASIA Regional Area, premiums amounted to 708 million euros, a decrease of 4 percent compared to the first half of 2021. This decline was due to a 12.9 percent drop in issuing in Italy, to 107 million euros, as a result of the decision to restrict new production in the dealership channel; and Malta, which declined 6.2 percent to 197 million euros, due to lower Life Savings issuing in the banking channel. In Turkey, premiums fell 2.3 percent to 150 million euros, strongly affected by the depreciation of the Turkish lira (-40.5%). In local currency, the business in Turkey improved by 64.3 percent. Premiums in Germany grew by 0.4 percent to 224 million euros in the first six months of this year.

In a context of continued market hardening, the reinsurance business closed the first six months of the year with premiums of 2.74 billion euros, up 11.4 percent, and earnings of 54 million.

Premiums for the Global Risks business rose by 21.7 percent to 958 million euros, with earnings of 17 million between January and June 2022.

Finally, the Assistance Unit’s revenue dropped by 25.7 percent to 211 million euros as a result of the exit from the Travel insurance business in the UK and Century in the US, as well as the sale of the business in Australia.

At the end of the first half of 2022, thanks to the sale of various operations, MAPFRE Asistencia’s net earnings amounted to 8 million euros, compared to a loss of 2 million euros for the same period last year. Following a major restructuring of operations, this unit is now refocusing its business in both Latin America and Europe.

Despite the extraordinarily complex environment full of uncertainty, MAPFRE reaffirms its intention to continue working toward the current Strategic Plan, announced at the most recent Annual General Shareholders’ Meeting, since it is the roadmap the company needs to continue advancing in growth and profitability. The Plan, designed before the invasion of Ukraine, is being carried out with flexibility to adapt each of its initiatives at every moment to the development of the different scenarios.

Regarding the Plan’s public economic objectives, both the aspirational objectives and the general framework are still valid. The combined ratio objective of 94-95 percent is challenging in the current context and could be subject to revision in coming quarters, depending on the development of inflation. On the other hand, the positive development of premiums, the improvement in the financial result from the increase in interest rates and the positive performance of currencies against the euro are factors that will work in favor of meeting the target of 9-10 percent ROE. Further, the excellent solvency and capital levels along with the reasonable level of debt are positive factors for meeting the 50 percent minimum pay-out target and therefore also the sustainable dividend. This confirmation of targets is based on there being no additional impairments apart from the current socioeconomic environment.

Regarding transformation and sustainability (ESG) targets, they are reaffirmed as fully valid as well.