KEY ASPECTS OF THE FISCAL YEAR

MAPFRE’s attributable earnings for 2021 amounted to 765 million euros, showing an increase of 45.3 percent on the previous year, thanks to solid business results in the Iberia and North America regional areas, where earnings growth exceeded 15 percent in both cases, and the good performance of the reinsurance business and the extraordinary profit (167 million euros) generated by the termination of the alliance with Bankia. Part of this gain, 104 million euros, has been assigned to shoring up the company’s future profitability, adapting and improving the operational efficiency of its businesses in Spain and Italy, as well as optimizing the Group’s financial structure.
These earnings illustrate the great resilience of the Group, which in 2021 dealt with COVID-related claims totaling more than 460 million euros. A breakdown of this impact by business line is shown in the accompanying table. 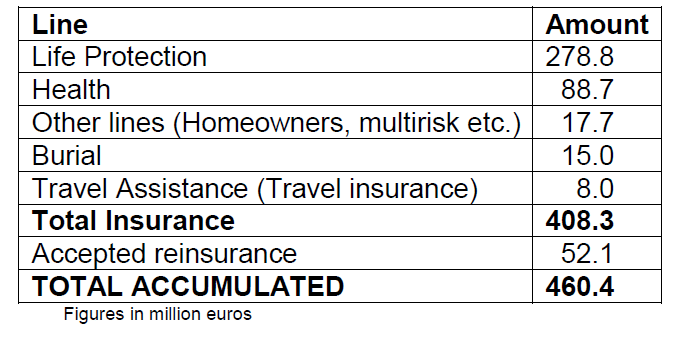 The Group’s revenues increased by 7.2 percent in 2021, exceeding 27.3 billion euros, while premiums reached 22.2 billion euros, up 8.2 percent. This increase in premiums comes on the back of a favorable evolution of the business in the Iberia regional area, in Latin America (where practically all countries saw growth) and in the reinsurance business.

The Group’s attributable equity at the end of 2021 stood at 8.46 billion euros, while total assets amounted to 63.9 billion euros, driven by the Bankia exit.

The Solvency II ratio as at the end of September 2021 stood at 193.8 percent, with 87 percent of capital being the highest quality (Tier 1). This ratio reflects a prudent approach to managing the balance sheet and active investment management, as well as the strength and resilience of MAPFRE’s balance sheet.

In Spain, premiums amounted to 7.5 billion euros, which represents an increase of 8.8 percent, 3.8 points better than the industry achieved in 2021. This above-market growth is recorded both in the Life and Non-Life businesses. Earnings from the business in Spain amounted to 534 million euros, 20 percent more than the previous year, and the country maintains its position as the leading Group profit contributor.
It is important to highlight the progress made in the Automobile business, with 6.2 million insured vehicles (+3.7 percent compared to the previous year), and premiums of almost 2.3 billion euros (+1.1 percent), compared to a decline for the sector of 0.8 percent.
General P&C insurance business premiums came in at 2.2 billion euros (+3 percent), reflecting the good performance of most Non-Life lines, with the growth in Homeowners (+2.1 percent), Communities (+6.8 percent) and Enterprise (+7.6 percent) all being notable. Health and Accident volume rose 9.5 percent to 689 million euros, double that of this business line in Spain.
The Life business recorded growth of 23.8 percent (practically triple the market growth), with premium volume rising to more than 2.1 billion euros. The improvement in the Life Savings business is notable, at 35.9 percent, and the agency channel also performed well, with premiums rising by more than 36 percent.
Pension fund assets stood at over 6.4 billion euros at the end of 2021, 11.8 percent higher than the previous year, while investment funds grew by 20.7 percent to over 4.7 billion euros.

In Brazil, premiums rose to more than 3.3 billion euros, showing growth of 8.3 percent, which converts to 15.2 percent in local currency. By business line, General P&C contributed the most to the Group, with premium volume of 1.7 billion euros (+20.3 percent), followed by Life at just under 1.2 billion euros (-4.5 percent) and Automobile, up 4 percent to 461 million euros. It is important to highlight the strong performance of both the MAPFRE channel, which grew by 14.1 percent, and the bancassurance channel, which increased by 16.2 percent, both in local currency terms.

Premiums in the LATAM South Regional Area increased by 11.5 percent, surpassing 1.6 billion euros, despite the depreciation of several of the region’s currencies (with the Peruvian sol down 12.4 percent, the Argentine peso down 12.1 percent and the Colombian peso down 5 percent). Peru continues to be the leading premiums contributor in the region, producing 517 million euros in 2021, up 1.9 percent, followed by Colombia, where growth of 24.5 percent delivered 365 million euros in premiums. Chile reported premiums totaling 339 million euros (+8.8 percent) and Argentina produced 184 million euros, 30.5 percent better than the previous year.

In the North America Regional Area, premiums for 2021 stood at just over 2 billion euros, down by 1.2 percent. In local currency however, actual growth is close to 2 percent. Earnings from this regional area were up by 16.3 percent to 89 million euros. In the United States, business remained stable, with premium volume of more than 1.7 billion euros, a result of both the depreciation of the dollar and the strict technical control measures implemented in recent years. In Puerto Rico, premiums stood at 335 million euros (-5.5 percent) and earnings for the country exceeded 16 million euros, compared to losses the previous year as a result of the earthquakes that occurred in the country.

In the EURASIA Regional Area, premiums for 2021 were just under 1.4 billion euros (-8.3 percent), affected by the strong depreciation of the Turkish lira (down 26 percent). Malta’s performance stands out, with business volume up by 17.6 percent to 405 million euros, thanks to the good evolution of the Life Savings business (+21 percent). Germany also did well, turning in 373 million euros in premiums (+3.2 percent), a result of a very solid sales campaign and an excellent renewal ratio. In Turkey, premiums totaled 304 million euros (+26 percent in local currency), 6.5 percent lower, with the fall driven by the depreciation of the lira and lower Automobile business volume on the back of technical underwriting rigor.

Premiums at MAPFRE RE, which includes the reinsurance business and the large risks business, grew by 10.3 percent in 2021 to just under 6.3 billion euros. Attributable earnings were 152 million euros, nines times higher than the previous year.
The reinsurance business closed out the year recording premiums of just under 5 billion euros (+12.7 percent), with earnings of 118 million euros, compared to just 2 million the previous year. This growth is all the more notable for having been produced in a context of significant catastrophic claims arising from the likes of storm Bernd in Europe, the net impact of which on earnings was 93 million euros.

Premiums at Global Risks rose by 2 percent to 1.3 billion euros, with earnings of 34 million euros, more than double that of the 2020 financial year.

Finally, revenues at the Assistance unit fell by 21.1 percent to 560 million euros, due to the intense restructuring that is being undertaken, including the exit from non-strategic countries. This unit did return to profitability, delivering net earnings of 0.6 million euros, compared to losses of 21 million the previous year.

The Board of Directors has agreed to propose to the Annual General Meeting a final dividend for the 2021 fiscal year of 8.5 euro cents per share, gross. Under this proposal, the dividend that the Group paid prior to the pandemic is recovered.
As such, the total dividend charged against the 2021 fiscal year amounts to 14.5 gross euro cents per share, representing a payout of 58.4 percent. MAPFRE has paid a total of 416 million euros in shareholder remuneration in 2021.
The return on the average share price for 2021 was in excess of 7.6 percent.

The main indicators of the Group’s social commitment are as follows: