KEY POINTS FOR THE FIRST QUARTER

MAPFRE has initiated its Strategic Plan 2019-2021, stimulating profitable growth and improving the key financial indicators against a backdrop of near currency neutrality and a still complex global economic environment.

MAPFRE revenues in the first three months of the fiscal year increased by 5.8 percent to 7.7 billion euros, while premiums increased to 6.4 billion euros, representing an increase of 3.3 percent (3.9 percent in constant currency terms). In turn, net earnings were 188 million euros, up 0.6 percent compared to the first quarter of the previous fiscal year.

This increase was supported by solid business performance in Spain, which remains the driver of the Group, and strength in the reinsurance business. There was a notable rise in profits in two of the Group’s major markets, namely Brazil and the United States, and significant increases were recorded in Mexico, Chile, Peru and the Dominican Republic.

The Group’s combined ratio improved by 0.6 percentage points to 95.9 percent at the close of March.

The Solvency Ratio at the close of December 2018 was 189.5 percent, with 87.3 percent comprising highest quality capital (Level 1), sustained by strong diversification and strict investment and management policies.

The Insurance Unit generated 5.4 billion euros in premiums between January and March of this year, 2.9 percent more than in the same period the previous year.

In Spain, premiums rose 7.9 percent, reaching 2.5 billion euros, compared to a market increase of 1.1 percent, beating the sector in both the Life and Non-Life. Impressive development in the Automobile business was noted, with premium volume growing 2.6 percent to 548 million euros (against an increase of 1.93 percent for the sector), especially in the personal and fleet segments (up 2.4 and 6.7 percent respectively). The number of vehicles insured at the close of March topped 5.7 million, almost 135,000 more than in March 2018.

General P&C business volume increased 4.4 percent to 646 million euros, led by excellent Homeowners and Condominium performances, which were up 4.7 percent (eight-tenths of a percent better than the sector), and 8.1 percent (five percentage points greater than the sector increase) respectively.

Premiums in the Health and Accident line reached 584 million euros, reflecting an increase of 4.8 percent compared to the first quarter of the previous year.

MAPFRE VIDA closed the quarter with 665 million euros, 20.4 percent more than the same period of the previous year, showing good development in both the agency and banking channels. The premiums to March include those of the former BMN for the first time, which came to 3.7 million euros. Mutual funds rose by 6 percent to 3.4 billion euros compared to December 2018, while pension funds grew 4.3 percent to 5.1 billion euros.

→ The Brazil Regional Area generated premiums of 967 million euros in the first quarter of this year (down 4.6 percent). The drop was the result of depreciation of the Brazilian real (6.7 percent), given that total premium issuing increased by 2.3 percent in local currency terms.Life risk business through the Banco do Brasil channel increased 33 percent in reals. As for MAPFRE SEGUROS business, volume was down 14.5 percent due to stricter underwriting discipline in the Automobile and General P&C lines, as well as a repositioning of rates. This strategy made it possible to reduce the combined ratio in the Automobile segment by 10 percentage points in the past year. Earnings for this regional area were up by 68.4 percent to 24 million euros, thanks to favorable development in the Automobile business.

→ Business in the LATAM North Regional Area increased 10.6 percent to 404 million euros, stimulated by appreciation of the regional currencies and the good performance of the business in Mexico and the Dominican Republic. The earnings result for this regional area increased by 34.7 percent, exceeding 13 million euros.

→ Premiums for the LATAM South Regional Area increased 0.6 percent to 398 million euros. Most noteworthy was the contribution by Peru, at 133 million (up 7.2 percent) followed by Colombia, with 90 million euros, 4 percent better, and Chile, which grew 16.9 percent to 63 million euros. Also of note is the improved combined ratio for the regional area, which stood at 95.5 percent for the quarter, up 1.5 percentage points compared to the same period last year.

→ Business volume in the North America Regional Area came to 551 million euros (-2 percent). In the United States, premiums slipped 1.9 percent to 476 million euros due to technical measures adopted in underwriting for the businesses in those states outside of the Northeast region. These measures also translated into improved results, with earnings of 9 million euros (compared to losses of 7 million euros for the quarter ended March 2018). Puerto Rico recorded premiums of 74 million euros (-2.3 percent) and boosted earnings by 63.7 percent to 5 million euros, while improving its combined ratio by 3.2 percentage points to 92.6 percent.

Premiums in the Reinsurance Unit exceeded 1.5 billion euros, representing an increase of 10.6 percent. This figure includes premiums from the Global Risks business (247 million euros), which was integrated within MAPFRE RE. Net earnings at MAPFRE RE were 52 million euros (-26.7 percent), affected by a more severe loss experience in large risks during the first quarter of this year.

Lastly, revenues for the Asistencia Unit rose 4.2 percent to 254 million euros, driven by the travel insurance business, which was up by 6 percent, and the specialty risks business in the United Kingdom.

The Board of Directors has ratified the payment of a final dividend against the results for fiscal year 2018 of 0.085 euros gross per share on June 25 next, giving a total dividend charged against the 2018 results of 0.145 euros per share. 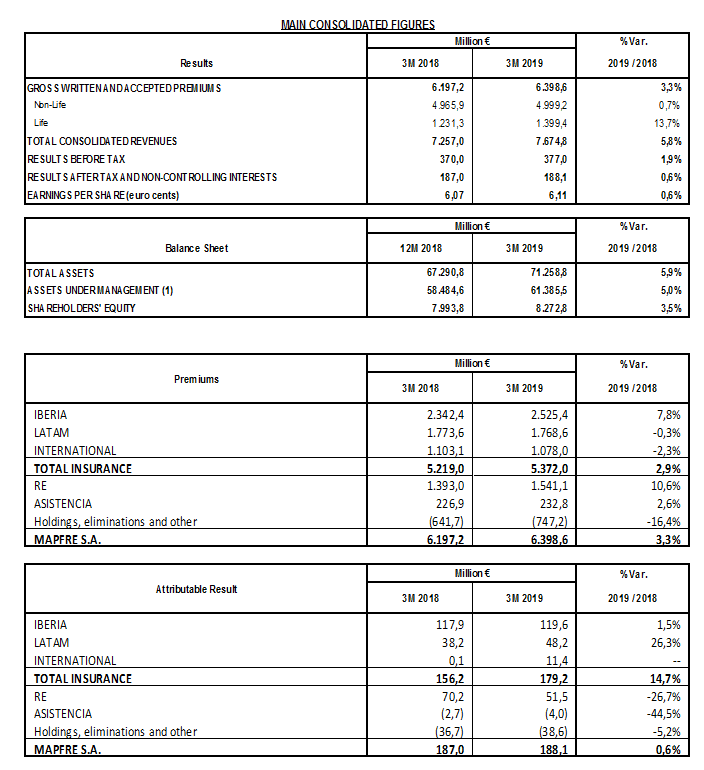 The Alternative Performance Measures (APMs) used in the report, which refer to financial measures not defined or specified in the applicable financial reporting framework, along with their definition and method of calculation, can be found on our website: https://www.mapfre.com/corporate/institutional-investors/financial-information/alternative-performance-measures/